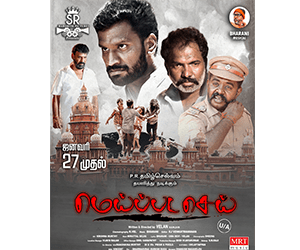 Director Shivakumar B said, ” Thanks to Victory Venkatesh garu, Sai Thej, Harish Shankar, Bobby garlu for blessing our team with their presence here today. I also thank all directors and producers who came to bless us. I am very happy that Victory Venkatesh garu has clapped my first film as director. I have worked as an assistant director for two films of Sai Thej garu. I am very happy that he attended this event today. I worked for many films in the direction department of Maruthi, Puri Jagannadh, VV Vinayak garlu. It is because of their inspiration I am here today. Our Production Head Anee Lama made me meet producer Suseela Devi garu and narrate her this story. Saloni is from Puri Connects. Thanks to Puri Connects, Puri Jagannadh garu, Charmme garu for adjusting the dates of Saloni Misra for our film. Congrats to them for the sensational success of ‘iSmart Shankar’ from our team. Big Boss fame Pooja Ramachandran is doing a crucial role in this film. Sai Kartheek is composing music for this film. The action sequences by Joshua garu who composed stunts for ‘Bahubali’, ‘Khaidi No 150’, ‘Saaho’ will be one of the major highlights of our film. My mother Jaya garu is my biggest strength. I learned production and direction skills from my mother Jaya garu. Wherever my mother is, I always have her blessings with me. My father BA Raju garu stood with me in all of my struggles and he is the one who makes me walk forward every minute. The title of this film ’22’ is a number. Plot has a key twist related to that number. There will be no kick if we reveal much about it now. This is a complete Action Entertainer blended with a murder mystery. The regular shoot will start from 29th of this month.”

Hero Rupesh Kumar Choudhary said, ” I wanted to become a good artist since my childhood. I am very happy that my dream came true today. I am a big fan of Victory Venkatesh garu. I used to watch his films 10, 15 times. I feel thrilled that Venkatesh garu clapped for my first film. One day I met Shiva garu. We discussed and did a web series. ’22’ has a very good script. A very good team has been set. I am getting trained in dance and fights for this film. I heartfully thank everyone who came to bless us. Shivakumar is making this film in a way that everyone will love it.”

Production Head Anee Lama said, ” Thanks to my childhood friend Amith. He introduced Rupesh to me. Rupesh is very much interested in acting. We were looking for a good director. I remembered Shiva. We both worked for Puri gari films. Shiva is very passionate about direction. We all did a web series. I also acted in it. All of us are working very hard for this film. Thanks to artists and technicians for their support.”

Heroine Saloni Misra said, ” Thanks to everyone who came to bless us. I am very happy to be a part of such a big project. Director Shiva is an amazing person. The film will be full of twists and turns. Everyone will love it. I am happy to act with Rupesh and Pooja Ramachandran. I hope you all loved my first film ‘Falaknumadas’.”

Music Director Sai Kartheek said, ” I know Director Shiva for last 5 years. I know the story and it is very exciting. This film will bring a very good name for Shiva. Thanks to Director and Producers for giving me this opportunity.”

DOP BV RaviKiran Said, ” I worked with Kamal Jeet garu in Mumbai. I and Shiva worked for a web series. This is my second project. This film has very good script along with a very good team. All the best to everyone.”

Chief Co-Director Pulla Rao said, ” I and Shiva worked with Vinayak garu. Rupesh Kumar is getting introduced as Hero with Maa Aai Productions ’22’. He is working very hard for this film. I wish this film to become a big success.”

Art Director Addala Raju said, ” Shiva garu called me one day to his office. He said that we are doing a film and narrated me the story. This film has a very good story. Thanks to the Director and Hero for giving me this opportunity.”

Actress Pooja Ramachandran said, ” Thanks to Anee master for giving me this role. Director Shiva auditioned me yesterday for this role. Mine is a crucial character which has a very good scope for performance. This is a challenging role for me. The launch happened in a grand manner.”

Accounts Head Sunitha Sharma said, ” I am very happy to become a part of Maa Aai Productions. Happy to be associated with Shiva Garu. As Victory Venkatesh garu has clapped for this film, The movie will definitely score a big victory.”